This update contains an overview of the Metrorail station, focusing on the design of the Mezzanine/Headhouse building and the latest construction photo. As previously discussed, the Metrorail station will have a pair of Metrorail tracks with platforms 700 feet long on either side of the tracks (first photo).    The Mezzanine/Headhouse building is approximately 165 feet long, and it sits astride the northern portion of the tracks/platforms.  The building is shaped like an inverted “U,” and the two supporting structures are called Headhouses.  They will support the upper part of the building, called the Mezzanine, which will contain the fare machines, fare gates, Metro kiosk, and the escalators/elevators leading down to the platforms (second photo-looking south towards Potomac Greens). The third photo shows progress on the West Headhouse (note-the four columns will support the one side of the mezzanine-level floor). 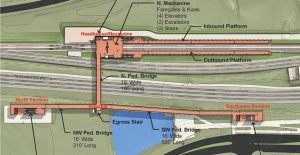 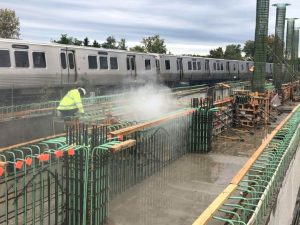