This past weekend, the builders intended to install the pedestrian bridge from Potomac Yard to the Metrorail station and install duct banks under the WMATA tracks to connect the AC switchgear building to the station. Work on the pedestrian bridge was postponed due to weather; however, the duct banks were installed. Residents at the north end of Potomac Greens may have noticed there is now a ‘clacking’ sound as WMATA trains pass through the section where the duct banks were installed. Due to low temperatures, the reinstalled tracks were bolted together instead of being welded together. This will be corrected when weather allows. The WMATA Communications and Outreach team posted the following update describing the work on www.NextDoor.com:

Potomac Yard Metro Station Weekend Work Recap.  Follow along for an update on the latest work at the future Potomac Yard Metro Station, which will be located between Reagan National Airport and Braddock Rd stations on the Blue and Yellow lines. Over the weekend, the project team installed new duct banks below the existing tracks, which will house and protect power and communications cabling to support the new station. This major invasive work required a weekend shutdown of rail service and several steps to complete.⁣ Once 3rd rail power to the tracks was turned off, the crew got straight to work. First, they cut and lifted out four 50-foot panels of existing Metrorail tracks. Next, they dug down to 8.5 feet in order to create enough room to support existing infrastructure and install the new prefabricated duct banks.⁣ ⁣ Once all 10 duct banks were lowered into the excavations, the crew encased the structures with a flowable fill concrete-type material. After the flowable fill cured, the crew began work of restoring the tracks. They started with replacing the structural subgrade, sub-ballast, and ballast used to support the tracks and then reinstalled the tracks that had been cut out from the location. ⁣ ⁣ The final photo includes a sneak peak of the existing station structure. Stay tuned for future updates on the station’s construction!⁣ 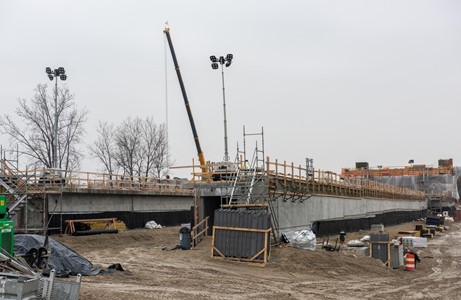